Please join the Psychology Department in recognizing the distinguished contributions and service of our faculty who retired during the 2016-2017 academic year. These faculty leave significant legacies in our undergraduate and graduate programs and we wish them well in their retirements. If you would like to send a memory or message of gratitude and congratulations along, those can be sent to Joanne Edwards. Donations in honor of our faculty can be made here.

Professor David Barash joined UW in 1973. David is an evolutionary psychologist who frequently taught in the UW Honors Program and taught seminars in psychology such as Ideas of Human Nature and the Psychology of Peace. David is a prolific public scholar, who frequently publishes opinion pieces about science, peace, and religion.

Professor Miriam Bassok joined UW in 1997. Miriam is a cognitive psychologist whose research explores problem solving and analogical reasoning. Miriam taught our undergraduate Cognitive Psychology course and was a long time director of the UW Psychology Honors Program through which she introduced our aspiring students to the research labs that became their thesis homes and ensured they had successful experiences.

Dr. Patricia Loesche was the Director of the Psychology Writing Center from its establishment in 1991. Patti also served as a lecturer in Psychology and taught a wide variety of undergraduate courses. She guest lectured widely on scientific writing in many psychology courses, and collaborated with faculty on the design and evaluation of writing assignments.

Professor Geoff Loftus joined UW in 1972. Geoff’s scholarship addresses human memory, visual perception, and statistics. Geoff is a highly regarded expert witness who has been instrumental in educating the courts about the science of eyewitness memory and his testimony has resulted in exonerations of those wrongly convicted by faulty eyewitness identification procedures. Geoff taught Probability and Statistics to thousands of psychology majors.

Professor Jaime Olavarria joined UW in 1990. Jaime’s scholarship explores the development, organization, and function of neuronal pathways in the visual system. Jaime taught our undergraduate course in Biopsychology and he led many Exploration Seminars taking UW undergraduates to Chile to learn about public and mental healthcare delivery systems.

Psychology Assistant Professor David Gire and his collaborator Biology Assistant Professor Bing Brunton have received a UW Innovation Award to develop cutting-edge technology and new mathematical approaches to understand how the brain works during complex behaviors such as navigating and searching for food.  Through this award, Drs. Gire and Brunton will study cognitive functions of the brain, which integrate multiple abilities including perception, decision-making, and memory.  Their work represents a new collaboration for the University of Washington with the non-profit Open Ephys, an organization that supports the free distribution of data and open source development of technology for use in labs throughout the world. 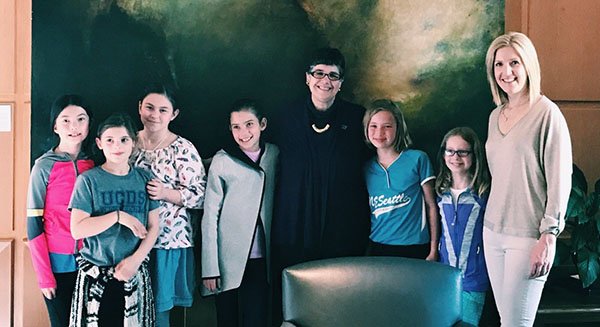 On May 1, Psychology Lecturer Nicole McNichols and her daughter Claire's Girl Scout Troop had the incredible pleasure of meeting with UW President Ana Mari Cauce in her Gerberding Hall office. President Cauce met with the group for over half an hour, covering topics on leadership, resiliency, and the difficulty of making very tough decisions regarding snow days at the University of Washington! She responded to all of their questions with incredible thoughtfulness and warmth. It was truly an inspiring trip for the girls that they will all remember for a very long time.

Mary Larimer was selected as the 2017 recipient of the Wayne J Katon Outstanding Mentoring Award. This prestigious award was created to recognize faculty members in the UW Department of Psychiatry and Behavioral Sciences who demonstrate a sustained commitment to mentoring, and is awarded to one faculty member each year.

Congratulations to Lori Zoellner who received her 1st year of NIH R34 funding for her research titled “A lay-led intervention for war and refugee related trauma.”

Stephanie Fryberg received funding from Raikes Foundation and Stanford University for her research on the effects of teacher’s behavior and classroom environment on the identity, growth mindset and performance of the underserved students.

Jaime Olavarria was awarded an Erskine Fellowship to visit the University of Canterbury in Christchurch, New Zealand, for one semester (February-June 2017). During his visit, he gave talks about the research in his lab and teach a course in the Psychology curriculum (Sensation and Perception).

Marsha Linehan won the 2017 Grawemeyer Award for Psychology! This is an award given to individuals whose ideas substantially impact the field of psychology and that have significant impact on our understanding of the human mind. Marsha joins the ranks of Elizabeth Loftus, former UW Psychology faculty in receiving this award.

Andy Meltzoff was elected to the Society of Experimental Psychologists. The society currently admits at least 6 new members annually from among the leading experimentalists in North America. The object of the society is "To advance psychology by arranging informal conferences on experimental psychology."

Sheri Mizumori received 5 years of funding from National Institute of Neurological Disorders and Stroke for her research on BRAINS: Broadening the Representation of Academic Investigators in NeuroSciences.

Tony Greenwald and Mahzarin Banaji are the joint recipients of the 2017 American Psychology Association (APA) Award for Distinguished Scientific Contributions, the APA's highest honor.  This award honors psychologists who have made distinguished theoretical or empirical contributions to basic research in psychology.

Tony Greenwald and Mahzarin Banaji are also the reipients of the Society of Experimental Social Psychology’s Scientific Impact Award for their 1995 Psych Review paper entitled, "Implicit Social Cognition: Attitudes, Self-Esteem, and Stereotypes." They will be honored at the 2017 SESP meeting to be held in Boston in October.