The following people were honored at the 39th Annual Psychology Research Festival on June 2, 2010:

The Distinguished Teaching Award for graduate students, given for outstanding service and excellence in teaching, went to Andrew Bock and Sarah Jensen Racz.

The Distinguished Service Award for co-authoring a successful proposal which resulted in a major upgrade of the Department's computing facilities for graduate and undergraduate students went to Andrew Bock and Rick Anthony Cruz. 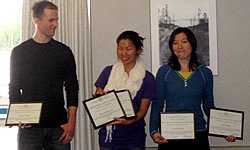 The Graduate Student Service Awards honoring graduate students who have consistently demonstrated service to the Psychology Department as a whole, and to the graduate student community in particular, went to Andrew Bock, Rick Anthony Cruz, Lori Wu Malahy and Clara Wilkins.

Sharon Hsu, a third year clinical student, was selected as one of 22 fellows for the 2010 Psychology Summer Institute, hosted by the American Psychological Association. Sharon participated in a one week training program in Washington, D.C. Sharon's dissertation focuses on examining the stress and coping model of alcohol use among treatment-seeking Asian Americans. Sharon thanks her advisors, Alan Marlatt and Mary Larimer, for their support and guidance.

Nicholas Nasrallah, a behavioral neuroscience student with Ilene Bernstein, defended his dissertation, "A Neuroeconomic Approach to the Study of Substance Use: Risk and Reward Valuation Following Adolescent Alcohol Exposure," and has joined Yale Law School this fall.

Jeff Lin, cognition and perception student with Geoff Boynton, received a $10,000 scholarship from Penny Arcade for his research on how vision scientists can contribute to game design, from reducing motion sickness during game play to making games accessible to color blind gamers.

Andrew Fleming, child clinical student with Robert McMahon, was featured as a "Top ESPN Clip of the Day" for his catch during the 2010 World Ultimate Frisbee Club Championship in Prague. Andrew plays with the Sockeye team, which placed 2nd in the Championship and 1st as Spirit of the Game. Congratulations!

Sharon Hsu was honored as the July Volunteer of the Month at the Asian Counseling and Referral Service. The honor is in recognition of the clinical service she has been providing for their clients since fall 2009 (to present) through the Department’s practicum.

The following students completed their general exams and advanced to candidacy for the Ph.D. in Summer 2010: Sharon Hsu, Andrada Neacsiu, Trevor Schraufnagel, and Cory Secrist.

We had a bumper crop of Ph.D. graduates for Summer quarter, 2010. Many of these graduates have begun post-doctoral training and others have assumed academic positions across the country. We wish our graduates the very best life has to offer and hope to hear from them soon!

Lou Nemec was promoted to Major from Captain in the U.S. Army on October 1. He is second year Cognition and Perception with Susan Joslyn.

Eric Pedersen was one of the recipients of the 2010 American Psychological Foundation/Council of Graduate Departments of Psychology (APF/COGDOP) Graduate Research Scholarships. He is an Adult Clinical student with Mary Larimer.

Andrew Bock, a behavioral neuroscience student with Jaime Olavarria, was first author in a paper published in the October issue of Frontiers in Systems Neuroscience, the title is "Diffusion tensor imaging detects early cerebral cortex abnormalities in neuronal architecture induced by bilateral neonatal enucleation: An experiment model in the ferret."