What can singing birds teach us about how children learn language? 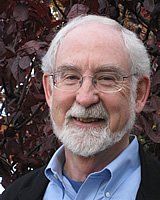 Language is often considered to be a uniquely human ability and the development of language in children is one of the most important developmental milestones. But how unique is it? The development of acoustic communication in songbirds has many parallels with human language learning. Like human language, songbirds learn to communicate very early in life. In addition, there is an early “critical” period for song learning where exposure to song is essential for normal development. The same is true for human language and obvious to any adult who has experienced difficulty learning a second language. Both song and human language are fundamentally social and interactive. Professor Beecher’s research has demonstrated that not only must a young songbird participate in singing, young birds are preferentially attracted to the sound of birds singing to each other compared to song in isolation. In other words, they are attracted to the social context of singing. Parallel research in humans has also shown that social interaction is crucial for language learning. Another similarity is that song is learned in stages. The “babbling” stage in humans is well known and believed to be an important precursor for human language development. A similar “subsong” stage is evident in songbirds and Professor Beecher’s research has shown that this “song babble” is critical for normal song development.

Given all the similarities with birdsong, human language – and the process of learning it – is perhaps not so unique after all. By understanding the developmental process in a species as different as a songbird, we can more easily identify general learning mechanisms and strategies and, ultimately, discover the truly unique aspects of human language.

For more information on Professor Beecher’s research, visit his website at: