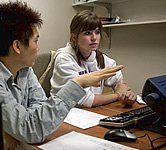 Jeffrey Lin (pictured here explaining his experiment to a participant) and advisors Geoffrey Boynton and Scott Murray use science based on dual visual systems to explain the George Bush “shoe-ducking” incident--specifically, why former President Bush ducked in time, but Iraqi Prime Minister al-Maliki did not flinch. In the split second before the shoe is launched towards the men, they each have different perceptions of the same event as it unfolds. Bush decides to duck while al-Maliki deems the shoe as non-threatening. The study explores how something may visually appear the same but is processed differently depending on the viewer, strongly suggesting a dual visual system.

This work is published in a high-tier journal Current Biology, and was in the news at Times Online , Scientific American, Scientific Blog , and UW News .

Relating to this research, Lin and his advisors are also hoping to apply these principles to the game of baseball. Perhaps it will explain some of the mechanisms underlying accurate performance and decision making.  Furthermore, it may one day allow researchers to predict in the lab player performance on the field. This story was on TV in multiple locations: http://www.wkowtv.com/Global/story.asp?S=11039936
http://www.wxow.com/Global/story.asp?S=11105389