"Psychology has taught me to be skeptical without being cynical, understanding without being all-knowing, and intellectually flexible without being ungrounded."- Spencer Coates (BS, June 2010) 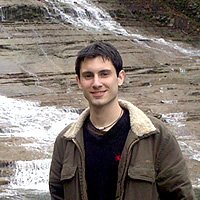 Spencer Coates is reflective.  Reflective in his self analysis, as well as in both the nature of psychology as a discipline and in his choice of psychology as a major.  With an initial exposure to the subjects of heuristics and biases in his Psychology 101 class, Spencer began to look to psychology as a lens through which to study human reasoning and decision making.  "I had always been interested in logical fallacies and the seeming irrationalities of human reasoning," says Spencer, continuing that "after being a bit unsatisfied with the answers economics and philosophy were giving me, I found psychology to be the field where the most intellectually rigorous approach was taken to studying the intricacies of human judgment."

“Intellectual rigor” certainly comes to mind when thinking about Spencer Coates' undergraduate academic career.  Clearly not one to shy away from a challenge, this long distance runner – who is set to run his first 100-mile race this summer – is completing the psychology honors program under the guidance of professor John Miyamoto, as well as a second major in math and a minor in law, societies and justice.

One of two psychology majors nominated for the prestigious Dean's Medal in Arts and Sciences, Spencer notes that he has tried to use psychology to some extent in all of his extracurricular activities. “My knowledge of human reasoning has helped me immensely in my career as a collegiate debater, and my studies in developmental and cognitive psychology have aided me in my efforts as a math tutor to elementary and high school students.”

Spencer urges new psych majors to take advantage of the wide range of resources available to students at UW.  Emphasizing the University's world renowned faculty and cutting edge research, Spencer offers a simple piece of advice: be nice to your professors and you just might learn something.

Now, poised to begin law school at the University of Pennsylvania this fall, Spencer pauses for one last reflection on his decision to study psychology.  "In the end, I have realized the simple beauty of our approach: many psychologists may end their career without answers to life's biggest questions, but if the best we can do is to achieve a verifiable set of fragments of insight into the human condition, then I would call our field a successful one."