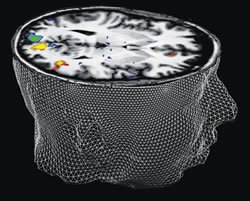 UW Psychology has long been an international leader in neuroscience research. Our faculty and graduate students have uncovered cellular processes of learning and memory, described important mechanisms of auditory and visual information processing, elucidated the role of brain dopamine systems in motivation, and discovered mechanisms of neural plasticity that give rise to adaptive behavior. In addition, UW Psychology has a 50-year tradition of being a key contributor to both undergraduate and graduate programs that provide interdisciplinary training in the neurosciences across departments spanning the College of Arts and Sciences and the School of Medicine.

Today, our faculty and students are at the forefront of applying neuroscience methods to all aspects of human behavior. We use techniques that range from functional imaging of brain activity by means of fMRI to recordings of neural electrical potentials on the scalp by EEG, to correlation of behavior and perception with underlying neural anatomy and physiology. We apply them to the study of areas as diverse as child development, visual and auditory perception, language processing, social inference, and child and adult psychopathology. Here are some examples.

Geoffrey Boynton, Associate Professor, studies the neural bases of visual perception and attention and has conducted key research to demonstrate the validity of fMRI as a research tool. He uses fMRI to measure brain responses within the visual cortex of humans while they view various visual stimuli. Among many other important findings, he and his collaborators have demonstrated that those with developmental dyslexia show reduced fMRI responses in a motion processing area of the brain, called area MT+, and that these differences correlate with behavioral measurements. These results are consistent with the hypothesis that developmental dyslexia is associated with a deficit in the magnocellular pathway of the visual system.

Steven Buck, Professor and Chair, studies human vision and uses perceptual and psychophysical measures from human observers to reveal the processing pathways of neural signals in the retina. He is particularly interested in how neural signals from rod and cone photoreceptors influence human color vision. His approach involves determining how our color perceptions reveal the possible visual neural pathways, how well the known neural anatomy and physiology can explain our perceptions, and what aspects remain to be explained.

Ione Fine, Assistant Professor, also studies the neural bases of visual perception and the effects of long-term visual deprivation. She studies the perceptual changes caused by long-term visual deficit and uses fMRI to relate these changes to the effects on the human visual cortex. These studies provide insights into changes in neural processing that occur as a result of blindness and reveal, for example, how regions of brain that normally process vision are co-opted by the auditory and tactile senses. The studies also reveal which perceptual abilities and neural functions can recover when sight is restored.

Scott Murray, Assistant Professor, uses a combination of behavioral and fMRI techniques to understand the neural mechanisms of object recognition and other high-level visual processes. His research, some of which was published recently in the prestigious journal Nature Neuroscience, uncovers mechanisms through which the human visual system uses ambiguous two-dimensional retinal information to infer unambiguous three-dimensional structure in the environment. His work has also provided surprising new results about cortical neural processing, showing that feedback from higher-level perceptions, such as apparent size, can change the representation of visual information at the very first cortical area for visual processing.

Lee Osterhout, Professor, uses fMRI and event-related potentials, a form of EEG measurement, to examine the cognitive and neurophysiological underpinnings of human language. His pioneering work has identified brain-wave signals associated with the separate analyses of the meaning (semantics) and structure (syntax) of language. Among other findings, his research has revealed increased gray matter density in the brains of English-speaking university students following a nine-week Spanish class. This result adds to a growing body of evidence suggesting that structural changes in the brain can occur after amazingly brief periods of instruction or practice.

Sapna Cheryan, Assistant Professor, is a social psychologist whose interests include identity, stereotypes and prejudice. She is currently working with Dr. Brian Knutson at Stanford University to identify facial characteristics used to infer personality and the neural mechanisms that support these inferences using fMRI techniques. The goal of this research is to identify which structures in the brain are responsible for encoding facial features relevant to emotion and linking them to interpersonal inferences.

Andrew Meltzoff, Job and Gertrud Tamaki Professor and co-director of the UW Institute for Learning and Brain Sciences, an interdisciplinary center dedicated to discovering fundamental principles of human learning, has been using imaging technology (EEG, fMRI) to elucidate mechanisms of cognitive development in children and the neural basis of empathy and compassion for others in adults. He is also part of a new grant proposal seeking to bring a new, powerful, multi-million dollar brain imaging device to campus—one called magnetoencephalography – which can safely measure neural reactions in very young children.

Jessica Sommerville, Assistant Professor, among other interests uses electroencephalography (EEG) to study commonalities between language processing and action processing. The research may be relevent to developmental disorders in which both abilities are impaired, such as autisim. In future work she plans to investigate infants’ event-related potential (ERP) responses in order to elucidate developmental relations between language processing and action perception.

Theodore Beauchaine, Robert Bolles & Yasuko Endo Associate Professor, studies different forms of psychopathology in children. Recently, he has begun using fMRI to elucidate the neural bases of impulse control disorders including ADHD and delinquency. These studies show abnormal processing of reward and mild punishment in the caudate and anterior cingulate cortex, respectively, in boys with these conditions. He is currently extending this work to boys and girls who are depressed.

Marsha Linehan, Professor and director of the Behavioral Research and Therapy Clinics, develops and evaluates behavioral treatments for severe and persistent borderline personality disorder, particularly when accompanied by high emotion dysregulation and suicidal behaviors. The treatment she has developed, Dialectical Behavior Therapy (DBT), has been shown effective in multiple clinical trials, and she is now conducting research to elucidate the mechanisms of action of treatment effectiveness. This includes the use of fMRI to identify regions of functional change in the brain as a result of behavioral intervention.

Functional magnetic resonance imaging of the human brain plays a key role in research on many facets of human neuroscience. Thus, we’re delighted that a new research-dedicated Philips 3-Tesla magnetic-resonance imaging scanner to carry out this research was installed on campus over the summer.

The scanner will be jointly managed by Radiology and Psychology and is partially supported by a $2M NSF grant awarded to UW Psychology. The dedication ceremonies for the new scanner featured a half-day scientific seminar, co-organized by Associate Professor Geoff Boynton, with talks by faculty from UW Psychology (Assistant Professor Scott Murray) and Radiology and distinguished visitors (Drs. Gary Glover, Stanford, and Richard Buxton, UCSD).

The opening reception (see photo) was attended by Deans of the School of Medicine and the College of Arts & Sciences and UW Provost Phyllis Wise. Geoff Boynton and Scott Murray have also taken the lead in shared management and user groups.

A training program consisting of tutorials, workshops, seminars, and outside speakers is being put in place. And Psychology and Radiology have jointly established an Innovation Fund with a goal of $1M in funding to increase the quality and quantity of neuroimaging research by both new and established investigators here at UW.

Assistant Professor Ione Fine has organized a two-quarter class to provide background in use of fMRI for new faculty and student researchers in Psychology and across campus.

David Barash – profiled in The Professors: The 101 Most Dangerous Academics in America, book by conservative commentator David Horowitz

Geraldine Dawson – frequent national publicity for work on treatment and genetic basis of autism and for involvement with the International Autism Genome Project, a consortium of over 150 scientists around the world.

Tony Greenwald – appeared on June 4th “Oprah Winfrey Show” about “overcoming prejudice”; – interviewed on ABC’s “20/20” show on stereotypes and the inner workings of the human mind

James Ha – often featured as a certified animal behaviorist in local media on whales, crows, dog and cat behavior, and the controversy about pit bull dogs

Randy Kyes - established the Aceh Student Assistance Fund to help students after the December earthquake and tsunami at Bogor Agricultural University, Indonesia, an institution with which the UW has had a cooperative program since 1991

Marsha Linehan - interviewed by O, The Oprah Magazine on her work with Borderline Personality Disorder