Research training put to work for children in Ethiopia 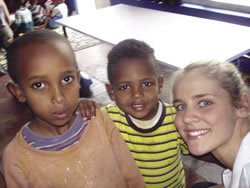 Susan Holmgren first went to Ethiopia in 2006, after finishing her psychology BS and a Masters degree in social work. “It was AMAZING!” remembers Susan, “I loved the food, language, culture, people, and especially the kids…they were all so beautiful!” Susan had long hoped to work in adoption and social work with children. As an undergraduate, she worked with Associate Professor Liliana Lengua, from whom she acquired a passion for research and how it can be applied in practice and in policy advocacy. Susan started working for Adoption Advocates International shortly before going to Ethiopia. That organization helps orphaned children from Ethiopia and other countries by facilitating adoptions in the US and by running sponsorship programs for children who remain in those countries.

Susan says that her research training with Professor Lengua has helped in the methods she uses to seek out information for her adoption and sponsorship work. The results of these investigations provide information that is important for the cases of specific children, but also help inform how policy should be shaped to aid many other children and families. “UW was amazing! Psychology students have such great opportunities,” observes Susan.

Susan is now working to expand the sponsorship programs in Ethiopia to include a wider range of social and psychological support services and to extend these to children in more remote, unserved locations. More information about Adoption Advocates International, which is based in Port Townsend, can be found at www.adoptionadvocates.org. n

What are some elements of a classic fairytale? There may be monsters to slay. There may be magic afoot. And, surely, there must be a hero. Native Kenyan and UW psychology alumnus Peter Kithene (BA, 2007), is living the role of the hero in a fairytale of his own making. The monsters are poverty and disease. The magic—perhaps 98% hard work and vision, and 2% serendipity. Last fall, Peter was one of six people chosen as CNN Heroes. “The event was like a fairytale,” says Peter, remembering the internationally televised award ceremony where he received a$25,000 award for his work building a health clinic in western Kenya. (Peter had previously won $10,000 as a Heroes finalist.” )

The , which Peter founded while still an undergraduate psychology major, focuses on serving widows and orphans in poverty-stricken and disease ravaged rural Kenya. Now a first-year graduate student in the UW School of Public Health, Peter splits his time between Kenya and Seattle, directing the work of the clinic and pursuing a Master’s degree in public health. It’s a delicate balance, made possible by Peter’s drive and determination and the love and support of his wife Katrina and 16-month old son Matho (who he calls Simba). Eased, perhaps, by the CNN Heroes award and the influx of good wishes and donations it has brought.

Thinking about how his life has changed following the CNN award, Peter reflects that people treat him differently, “but in a good way,” he says. “Also,” he adds, “you become more responsible.” Humble words from a young man who emerged from a childhood marked by the loss of six young siblings and the deaths of both parents when he was twelve, to travel across the world and study psychology at the UW. Why psychology? “I came from a background where none of my peers moved beyond where we were,” explains Peter. “I wondered—where does this drive I feel come from? Where does the hope come from, and how do I instill that in others?” Peter believes that his study of psychology has helped him to answer some of these questions.

Peter plans to develop a network of “the best healthcare delivery systems in rural Africa,” and to provide leadership in the healthcare field. The CNN award has given Peter international exposure and the opportunity to bring his message of inspiration to a wide-ranging audience. While the vision and drive were clearly part of Peter’s basic character, he credits his study of psychology for giving him skills to help realize some of his dreams. Remembering classes that were foundational for him—especially as a person coming from a background different than that of most U.S. college students—Peter credits Psychology 250 (Racism and Minority Groups) and 345 (Social Psychology) with giving him the tools to survive. And, don’t forget Psychology 315… “My statistics class in psychology is so helpful!” As a new graduate student, Peter says that Psychology 315 has given him an edge over many of his fellow students.

Having already achieved more than an ordinary lifetime’s worth of accomplishments, Peter is clearly living an extraordinary life. Recently asked to be a guest speaker at a fundraising concert in Boston for the group VUMA-Kenya, Peter was honored. Upon receiving the invitation, he demurred, saying that he just wanted to be there “as a Kenyan.” The response came… “No—you are a leader now.” Words that may take some getting used to, but that Peter is surely to hear for a long time to come. The hero’s charge, in the fairytale story of Peter Kithene. To learn more about the Mama Maria Clinic and find out how you can help, visit www.mamamaria.org.

Nearly half of this country’s children under five years of age are now ethnic minorities, pointing the way to a demographic shift that will reshape our country, as well as the way we study children and families. Dr. Cauce will discuss African- and Mexican-American parenting styles and how they serve to hinder or help adolescent adjustment. Dr. Conger will focus on how contextual forces, including socioeconomic status, neighborhood factors, and marital relationships set the stage for parenting amongst African- and Mexican-American families of adolescents.

Symbolic Understanding in Infants and Young Children: Challenges and Benefits

One of the most pressing concerns for child service providers is dealing with youth who engage in conduct problem behaviors such as aggression and delinquency. In this lecture, Dr. McMahon will discuss the development and evaluation of a comprehensive intervention to prevent the development of serious conduct problems in school-age youth who are at-risk. Dr. Tolan will focus on promising efforts and continuing limitations of current scientific knowledge to identify and intervene with child and adolescent conduct problems.

The Psychology of Blink: Understanding How Our Minds Work Unconsciously

Recent psychological research has revealed widely-held unconscious thought patterns that most people would rather not possess. Dr. Greenwald describes his research developing the method (described in Malcolm Gladwell’s Blink) that reveals this unconscious mental content, demonstrates the method, and describes how the unconscious mental content that it reveals affects our behavior. MacArthur awardee Dr. Cooper will describe her research on how patient race influences patient-physician communication and physician clinical decision-making, including her efforts to design interventions to negate these undesired racial/ethnic health-care disparities.

Elaine Franks - 2007 Distinguished Staff Award for her support as administrative coordinator of the research and clinic operations of Professor Marsha Linehan.

William B. & Judith A. Little

Ryan A. & Elizabeth A. Morales