TJoyce Yi - Awarded the Graduate School Dissertation Fellowship for use during the 05-06 school year.

Raphael Bernier - Awarded a Huckabay teaching Fellowship for use during the 2004-05 academic year.

Dorothy Mandell and advisor’s research on how young primates learn about their world was featured in the Seattle P.I. on August 3. http://tinyurl.com/3k3ca

Janice Kuo was awarded a very competitive NIMH Predoctoral Fellowship for her project “Psychophysiology and Emotion Regulation in Borderline Personality Disorder.” “Against daunting odds... Janice Kuo persisted in seeking this type of funding, and her exceptional abilities, incredible hard work and notable persistence has paid off, literally.

Erin Harley and advisor’s research on identifying someone close up or at a distance is featured in the on-line University Week and will be in Psychonomic Bulletin & Review. (Erin recently earned her doctorate here and is now a post-doc at UCLA.) http://www.uweek.org/, click on “Witnesses’ eyes deceive them when distance is too great.”

Sona Dimidgian will receive the APA 2005 Division 12 Student Research Award. She is in her 8th year and on her second year of clinical internship. Her advisor is Bob Kohlenberg.

Karen Toth received the 2005-06 Gatzert Child Welfare Fellowship for her dissertation research. Karen Toth is a PhC at the UW Autism Center. Her advisor is Geri Dawson, Child Clinical.

Sheila Crowell received the Lizette Peterson-Homer Injury Prevention Grant sponsored by Division 54 and the American Psychological Foundation. This grant supports research related to the prevention of injuries in children. Her advisors are Ted Beauchaine and Geri Dawson.

Michele Bedard whose NRSA -- Fragmentation and Disorganization in PTSD -- is being funded (on the first shot!). Michele is in Adult Clinical; her advisor is Lori Zoellner. 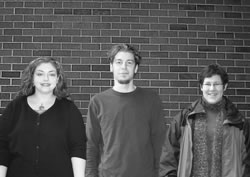 Dawn DeGere, Erin Hunter, and Michael Perry, winners of the 2005 Department of Psychology Distinguished Teaching Awards for Graduate Students. Dawn DeGere is in Social/Personality; her advisor is Yuichi Shoda. Erin Hunter is in Child Clinical; her advisers are Lynn Fainsilber-Katz and Ted Beauchaine. Michael Perry is in Cognition and Perception; his advisor is John Miyamoto. 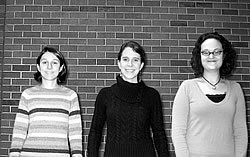